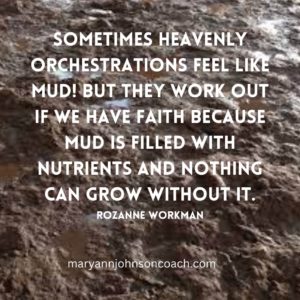 I received a call from my sister, Rozanne. She was giving me an update on a difficult situation in her life. It was such a profound example of taking responsibility for your responses and choosing to let go of suffering, I asked her if I could share the experience with you.

I know how important perspective or the story that we tell ourselves in any given situation is. I have learned how to take control and have gotten good at doing it. It requires lots of practice. Each time I am triggered in any way, I stay out of blame, and I seek the facts, not what I feel, but what is true. Often there are few facts and many assumptions.

I have also learned that when we blame, complain, or stay in the negative, it is harder to problem-solve and get a result that blesses us. Often, we choose to suffer. I learned this lesson over time. You can read about it HERE.

Anyway, back to my sister’s experience. I think you will see both life principles at work. You will also see how using them made a huge difference in her outcome.

My sister had a new job and was working part-time.  After being there a short while, one of the supervisors had to take leave due to ill health. Rozanne was bumped up to full-time.

Quickly my sister noticed that there were many unkind things being said about the supervisor who was on leave. Most felt she was not on the level and was taking advantage of the system. Rozanne, when caught in one of these conversations, would reply, “You don’t know that.”

At the end of 2022, the supervisor was scheduled to return to work after being gone for five months. Rozanne was going to lose her full-time position which paid $900 a month. She was given only a couple of days notice of the coming change. Her husband has dementia and they had gotten used to having the extra funds in their budget. $900 was a huge cut in their total income. Occasionally, this thought would come to her mind, “This isn’t fair. Maybe she is using the system. I should fight this.” However, she would not engage with this thinking. She threw it out and replaced it with this, “I’m glad she’s better and can come back. I know I will be taken care of, and all will be well.” Rozanne decided to trust God and take control of her perspective. She began looking at her options to recoup the $900.

The week the supervisor returned, Rozanne was asked to retrain her. Wow, how would you feel about that? Rozanne had to work to keep her story positive. She was determined to be a blessing to this woman who had been out sick for so long. She had no facts or reason to believe that the supervisor had done anything wrong.

Here is the truth.

We get to choose how we see things. It is a choice. You have 100% control over your responses even when you cannot control the circumstances. My sister believed this.

The day before the supervisor’s return, a coworker who would be working with the supervisor and Rozanne said, “Well, I may have to work for her but I’m not going to speak to her.” Rozanne asked her why not? The worker replied that this woman had taken advantage of the system and so she wasn’t going to be nice to her. Five months is a good amount of time for a random piece of gossip to really take root.

The next day the return of the supervisor and her retraining went well. She and Rozanne had great conversations and smiled a lot. Rozanne showed her how to do a couple of tasks in a more efficient way and the woman followed her lead and was grateful.

The coworker Rozanne had spoken with the day before was a new woman when she came to work. She was kind, smiled, and had a good conversation with the returning supervisor. Rozanne said, “I was rather shocked by her delightful countenance toward the Supervisor, but our conversation may have contributed to her change of heart.” It was a pleasant day for all three women. They had made it a good day by choice! They chose the perspective or story they would attend to in the situation. They stayed out of the negative, they choose not to suffer.

Here is the rest of the story.

Rozanne knew she had to make up the income loss. There would be some income from the part-time position she was returning to but the amount would change weekly as she would be on call. She chose not to count that in her budget. She wanted something more secure and stable.

Rozanne teaches exercise classes for the elderly in her city. She has certifications and many years of experience under her belt. She had a thought that she should request a raise. She was teaching four classes weekly and making $90 per class. With the current cost of living, she felt a raise to $125 dollars per class would be reasonable. This was a scary thing for her to contemplate doing but the thought was clear. She went to her computer, sat down, and drafted a letter. After a moment of consternation, she hit send. Within minutes a reply came through that her request for a raise had been granted. WHAT!!!

Later that day she received a letter from the government that her husband’s Social Security had been raised by $100 and hers by $75. Things kept happening and within 48 hours Rozanne had replaced the whole $900.

Was this a lucky break? Was it a coincidence? NO. I have lived this and so has my sister. She took control of her story. She stayed out of blame and the negative. She looked for answers, remained calm and trusting, and took a step. It was a scary step, but she took it. God had her back because she was living true principles.

Rozanne was blessed as she took control and stayed out of victim mode, and this blessed others. The supervisor was welcomed back. She had a wonderful day and could move forward with confidence. The coworker learned the value of letting go of gossip and controlling her story. She had a lovely day and will now continue to support the returning supervisor and will help put gossip to rest. And Rozanne, well she had a great day also, and because she remained positive and was willing to step out in faith and trust, her problem was resolved.

I know this story was long, but it’s important. I have three happiness commandments posted on my wall. They are based on true principles, that when lived, help us let go of suffering, control our responses, and live better lives.

1. Be a Pollyanna. Look for the good. Trust that it is there. Stay out of the negative.

2. Clean the ditch. Farmers know that despite their best efforts ditches get clogged with
garbage. They must be cleaned out regularly so that water can reach the plants and they can grow. It is the same with our thinking.

3. Let go of suffering. Suffering is often a choice based on our perspective, our story. Take the time to clear your mind and look at the facts. Build your story around those facts and then add all the positives you can.

These three ways of being drastically changed my life and if you will use them as my sister did, and as I do, they will change your life too.

Let me end with what Rozanne said to me at the end of our phone conversation. It is worth printing and hanging on your wall:

“Sometimes Heavenly Orchestrations feel like mud! But they work out if we have faith because mud is filled with nutrients and nothing can grow without it.”