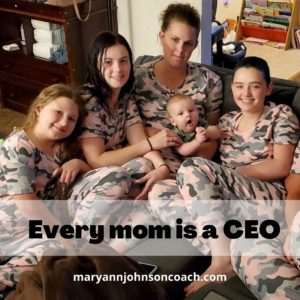 I have a friend, Nicole. She was a solopreneur, and a single mom, who homeschooled her two boys. That was a load to carry, however, Nicole manages well. That wasn’t always the case.

I recall when she was feeling overwhelmed with the load she was carrying. Nicole is intelligent, and she had numerous ideas that would make her business even more successful and give her the income she needed to raise two children on her own, but time was always an issue. There just wasn’t enough of it.

She couldn’t do everything by herself, but she kept trying. She felt bad asking for help. I mean, she should be able to manage, right? This ‘doing it all’ led to days when she wasn’t her best with the boys. She would struggle to remain calm, school felt like a huge weight, and she let her clients infringe on time with her family. She couldn’t say no. She carried on like this for several years.

This might sound like you. It was certainly me for most of the years I was parenting. It took me decades to understand systems and to be willing to get help. Eventually, Nicole learned some valuable lessons. These were the same lessons I had to learn. If you are overwhelmed and not managing as well as you want, you will have to learn them also.

First, Nicole began talking to other moms who had been where she was. I was one of those moms. I had never been a single mother, but I had a husband on the road, and money was always tight. We had seven kids. A load is a load even if they are not the same. As we talked, I was able to help her see that she had systems, but they weren’t very effective. We came up with ways to make her days flow better, to give her time for work, and to have more present time with her boys.

Then she hired a retired businessman who helped her develop better systems in her company and convinced her to hire some help. Team meetings made a big difference in her effectiveness and in her ability to manage time. It made a WORLD of difference in her ability to put her excellent ideas into practice which helped her gain new clients. Her income increased substantially. Her mentor helped her manage those clients more efficiently and with better boundaries. He taught her how to stop being a self-employed, overworked mom, and how to become a CEO.

That is an interesting acronym meaning chief executive officer. The CEO is the highest-ranking person in a company or other institution, ultimately responsible for making managerial decisions. That was definitely Nicole’s role in her newly structured company. It was also her role as a parent. Isn’t every father and mother a CEO? In two-parent homes, they are a team ultimately responsible for making decisions. In my friend Nicole’s case, she was the sole CEO.

Before Nicole got her systems in order and her thoughts out of her head so she could organize them and bring them to fruition, she was successful as a businesswoman and a mom. BUT and this is what I want you to take away, she struggled every day to feel successful. Nicole was overwhelmed much of the time. She felt she failed in many areas. She was overworked.

After Nicole began accessing wise counsel and good resources, she began talking to her kids. They were young, but they were still part of the solution. She got them to buy-in to doing things a new way. She helped them feel important and part of what was happening, not like pawns that were being told what to do. They began having regular family meetings. She accepted that her children were capable of greater executive function, and she started giving them more responsibilities.

Executive function refers to skills that help us focus, plan, prioritize, work toward goals, self-regulate behaviors and emotions, adapt to new and unexpected situations, and ultimately engage in abstract thinking and planning. This increase in trust and responsibility increased her children’s willingness to participate.

Things began to feel better; Nicole’s children became more involved and helpful. Her business expanded relieving her financial stress, she enjoyed working with others, and she felt supported.

There isn’t any way to remove the weight of parenting – the actual physical work, the mental work and the decision making, the responsibility. But there are ways to manage all this better so that you not only perform at a higher level, but you feel successful more often.

Nicole and her boys are managing life better. I manage my life better, and you can manage yours better too. This doesn’t mean you won’t have bad days, weeks, months, or maybe even a year.

Things happen, but when you can, get up and get back to consistently doing

what you know works.