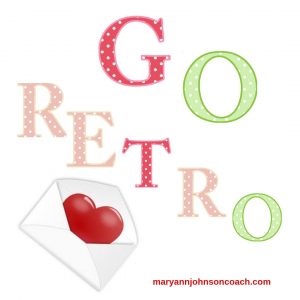 How can you create relationships

with people you only see once or twice a year?

One of my children’s complaints about their grandparents was that they weren’t very connected with them. We lived in Montana and it was a looooong drive to see them. They wanted to hear from their grandparents. So, when I became a grandparent, I decided to make the effort to connect a bit more. There have been years when I was fabulous and years when I wasn’t. But all in all, over a long period of time, I think it has worked out well.

With my children, we have learned how to use technology to stay in touch. We have a video app. that we talk on so we can see each other. It’s always nice to see someone’s face. We don’t spend hours a day on this endeavor. However, there will be a post every few days about the mundane as well as the exciting. We got to travel along when our son and daughter in law went to Costa Rica. We can get a blow by blow account when a baby is on the way. We have listened to violin recitals, watched portions of plays and seen some baseball games. We know when someone’s out of work or has gotten a new job.

But here is what I have done most consistently. I write letters and send cards. I know its old school, but it works for creating very connected relationships. There’s something thrilling about opening the mailbox and seeing a real letter. It even makes me feel a bit excited when it happens, which in our world of technology isn’t often.

A few months ago, I was having a conversation about writing letters and sending cards with a friend; I send hundreds a year. She said that she didn’t think it mattered to people anymore and that I was wasting my time and money. So, I asked the question on my Facebook page and got a lot of responses. Out of all of them, only one person felt like my friend. Everyone else talked about how they loved getting letters and cards as kids and how it’s still cool when it happens.

Let me give you some examples of how impactful a simple letter or card can be in the life of someone else and how connecting it is.

I have a nephew who has had a hard time growing into adulthood. So, many years ago, I decided to send him a card for every birthday.

A couple of years ago my nephew, who is now an adult, was really struggling with his life. That year when he got my card, he happened to be at his mom’s. She told me that when he opened it, he looked at her with a big smile and said, “She never forgets!” It matters to him!

Another sister has a granddaughter who has had some significant challenges due to divorce and parents who struggled, so when she was turning 16, I decided to send her a card. When she opened the card, she looked up and said, “This is the only card I have ever gotten for my birthday!” It isn’t that no one is saying Happy Birthday, it’s just that it’s all digital. That card meant a great deal to her.

Last year I sent an anniversary card to one of my sisters. On her anniversary she called, and this is what she said. “When I woke up this morning I couldn’t get out of bed. There wasn’t any reason to get up. Nothing new or interesting was going to happen today. But when I got up there was your card. You can’t imagine how much it meant to me!”

When my kids were teens some of them struggled with drugs. They didn’t always live at home. So, I began writing letters. I sent the letters to all my kids, even those who were at home. I bet they thought I was crazy to send a letter through the mail when I could have just handed it to them. But I know the letters mattered and kept our straying children connected enough to us that they never got lost. At some point, one of them took all the letters and put them in a book which she then gave to everyone for Christmas. It mattered!

Here’s another cool thing about cards and letters

In my letters and cards to my grandchildren, I always 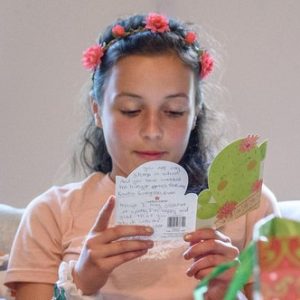 tape a piece of gum. On a birthday I may add a couple of dollars. That’s all. Years ago, as a family, we determined that we would not spend lots of money on gifts for either birthdays or holidays. We have all stuck with that intention. However, my grandchildren have other grandparents who send cool gifts in the mail. I worried about that. But I didn’t need to.

I voiced my concern to one of my daughters and here is her reply. “Oh my gosh mom, the kids LOVE your letters and cards. They care far more about them than any toy they get in the mail. In fact, they call you the Gum Grandma!”

You know, this isn’t just useful if you’re a grandparent. It’s valuable advice if you’re a parent who shares custody or who lives in a different state from your child. Get retro. Send a letter or card and do it regularly, even if you live in the same town. You’ll be amazed at how impactful it will be to your relationships.

So, what do I write about? Anything and everything. I write about the nearest holiday, what is happening in the news, what I am learning about, where I have been, what I am doing. Stuff, any old stuff. The letter can be long or short. It doesn’t matter. What matters is that someone took the time to sit down and share a thought or two. A card or a letter says loud and clear, “I see you. I hear you. I love you. You matter to me!”

6 Responses to “The Gum Grandma says, “Let’s get Retro!””