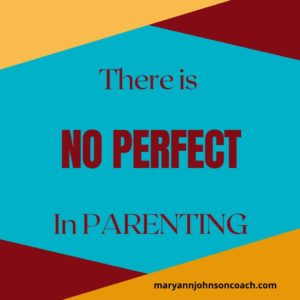 Perfect is NOT reality, especially in Parenting!

I had two daughters who had babies last year – one in June and one in Dec. One daughter suffered from postpartum anxiety, not to be confused with the blues or even depression. It was excruciating. Just functioning was a challenge. Besides the new baby, she had one preschooler and one grade-schooler.

Despite her struggles with health and energy, I saw her remember what her kids needed to do to be ready for school. I watched her get them to their events and lessons. I saw her force herself to school with her new baby to participate in a classroom party with her daughter.

My other daughter has tweens, teens, and grade-schoolers. She was up multiple times a night. But one morning bright and early I witnessed this: she was in the kids’ rooms getting them up, reminding them of what they needed for the day, giving cautions about getting to work on time and bringing instruments home after orchestra so they could practice. It was all in her head, and despite her baby fatigue, she was letting it out at the right time, with the right tone. There is no getting around it,

MOTHERS ARE AMAZING EVEN WHEN THEY’RE STRUGGLING.

My sons-in-law also experienced the addition of new babies into their families. One is in the last stages of genetic blindness and was ill at the time of the birth. However, he donned a mask and was by his wife’s side, not just during the delivery but until his wife came home a day later, even though fluorescent light burns his eyes. Then he returned, mask in hand because the baby had a severe bilirubin issue. His eyes burned as he endured hours of blue light. I watched him get up at night to feed his son, diaper, and cuddle him.

The other dad had a two-plus hour compute every day into the city. He left work early so he could get home sooner. When he got back, the load shifted from his wife’s shoulders to his own. He made food, played Candyland, fed the dogs, tucked kids in bed, and comforted his wife. There is no getting around it,

FATHERS ARE AMAZING EVEN WHEN THE LOAD IS HEAVY.

Neither of these couples is doing it perfectly. There are down days, moments of resentment, and checking out. BUT they get up daily and do it again because they love each other and their families. There is no way around it,

PARENTS ARE AMAZING EVEN WHEN THEY AREN’T PERFECT!!

Know a parent struggling because they aren’t perfect. Share. : )

One Response to “There is NO Perfect in Parenting!”