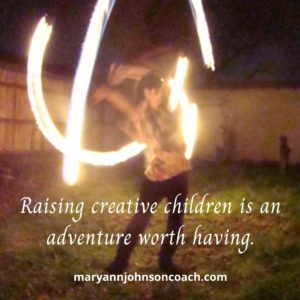 “When art teacher Kandy Dea recently assigned fourth graders in her Walnut, Iowa, classroom to create a board game to play with a friend, she was shocked by one little boy’s response: He froze. “While his classmates let their imaginations run wild making up colorful characters and fantasy worlds, the little boy repeatedly said, “I can’t think of anything,” Ms. Dea says. Although she reassured him that nothing he did would be judged “wrong,” he tried to copy another student’s game, then asked if he could make a worksheet instead. She finally permitted him to make flashcards with right-and-wrong answers.

“Americans’ scores on a commonly used creativity test fell steadily from 1990 to 2008, especially in the kindergarten through sixth-grade age group, says Kyung Hee Kim, an assistant professor of educational psychology at the College of William and Mary in Williamsburg, Va. The finding is based on a study of 300,000 Americans’ scores from 1966 to 2008 on the Torrance Tests of Creative Thinking, a standardized test that’s considered a benchmark for creative thinking.”

The above story and test results came from an article in the Wall Street Journal on December 15, 2010, A Box? Or A Spaceship? What Makes Kids Creative.  I am not particularly interested in test results, and I don’t place a lot of credence on tests themselves. However, as a mom, grandmother, and teacher, I have certainly seen this trend. Some children seem to have more difficulty being creative now than when I was a kid.

Some researchers feel that the growing amount of time children spend on screens has decreased their ability to be creative and to enjoy playtime. Others think that children today have as much creativity as ever but that public schools get a D in encouraging it. The belief is that schools are doing an inferior job of encouraging and supporting creativity in children.

As parents, it would be good to have some ideas about supporting and encouraging our children’s creative thinking. Right? I have to laugh at that. In my day, what our parents did to encourage and support our creativity, was to send us outside and say “go play,” and we did. We had a lot of creative play. We made up games, invented terrific machines, made mud cakes, ran and skipped and hopped and created jump rope games, etc. That is how my parents did it. But today is a new day, a new time, so here are some ways you can encourage creative thinking.

Tip 1 – Solving problems is a way to practice and encourage creativity.
Have family councils. Let your children in on problems that need to be solved. Allow them to voice their ideas. Listen to them with respect. Avoid the tendency to decide that their answers are wrong or silly, or naive. On the contrary, you may be surprised at what great ideas they come up with. I might also add that when answers to problems come from the children in the family, they are much more on board with putting the ideas into practice.

Maybe in your family council, you mention that your elderly neighbor is sick and needs help. What can you do to help her? Your children might volunteer to shovel her walks, water her yard, or sit with her and read; things they might not be willing to do if the idea came from you.

In your council, you might mention that you aren’t sure that you can save enough money for the annual trip to the family reunion, and you wonder what ideas they have to solve the problem. Some may suggest jobs they can do for neighbors, allowance money they can save and donate to the cause, or heaven forbid, they might even be willing to cut off cable for a while. LOL

Tip 2 – Thinking, discussing, and voicing an opinion are ways to encourage creative thought.
Have “mini-conversations” with your children about current events, historical events, books that you are reading. Don’t dumb it down for your children. Make your open-ended questions and comments age-appropriate but dare to talk to your children about things that matter. Even four-year-olds have a viewpoint on what happens in their world.

Tip 3 – Listening to your children’s ideas and valuing them as worthwhile is a great way to encourage creativity in your children. It gives them the courage to keep on thinking.

Refrain from judging your kids’ ideas. I think about Connor, the science-loving kid who started Connors Kits for Kids, an online company that makes kid-friendly science kits for kids. When all he was interested in was science, his parents didn’t freak out. They didn’t think, “Oh my gosh, he has to learn math and reading.” Instead, they came on board with his interest, and he and they bought a lot of science kits. Then, when Connor decided that most kits were not worth the money and wanted to find a way to provide great kits for kids that worked, his parents listened and helped him figure out how to do it. He was in fourth grade!

Tip 4 – Children are naturally creative in their play. Let them play, and amazing results happen.
I loved this example of encouraging children’s creativity from the Wall Street Journal article. “When Maureen Dougherty’s three kids were small, she and her husband Brian encouraged them to make up their own lyrics and dances to nursery rhymes, says Ms. Dougherty, of Stephens City, Va. Hearing Mr. Dougherty and the kids laughing one night, years ago, Ms. Dougherty opened the door to find them stumbling around with their eyes closed, singing original lyrics to ‘The Three Blind Mice.’

“After inventing spontaneous lyrics for years, their children, now 14, 18, and 20, enjoy public speaking and can think of things to say right off the cuff,” Ms. Dougherty says.

Tip 5 – Don’t focus on the outcome.
Adults tend to be outcome-driven, but for children, it is the process that counts. Creativity is in the process of doing. If it fails, then they will try something else if you don’t fall apart. Permit them to fail, and in the long run, they will succeed.

It is helpful to realize that if you raise creative children, they may not always behave like other children. They will feel free to talk, express their ideas; they will be bolder, more courageous. But, unfortunately, this way of being can land them and you in trouble. You will have to be brave and face up to what you have raised. Like me, you may get a pink slip from school stating that you’re 6-year-old is insubordinate. That experience made me laugh. Imagine six and insubordinate. And my grandson, Ben, is not your ordinary 9-year-old. He talks a lot about all the things he is learning. It annoys some adults.

I end with this delightful story from one of my own creative children, the insubordinate six-year-old, Jenny.

In the mid-’80s, flannel shirts were in. I sewed quite a few of them in my size. My six-year-old daughter Jenny loved my shirts and started wearing them to school. Of course, they were way too big for her, actually like a short dress. She solved her problem by pinning them at the neck with a large safety pin. Yikes, she looked like a street urchin; and yes, I had made some in just her size! I just said, “Oh well.” She had solved the problem to her liking and was happy with the result. She wore one of my shirts to school every day.

It wasn’t too many days later that I was called into the school to visit the teacher. She wanted to know if everything was OK at our home; was our money situation OK. (This was a small school, in a tiny town!) I got what was up right away and explained to her what Jenny was doing. The teacher was worried that the pin might pop open during playtime and that Jenny might get stuck. “Well, if that happens, I suspect she will change her wardrobe,” I responded. Jenny wore those ridiculous shirts for a few more weeks. Then she decided that they hampered her ability to play ball and other games, and her wardrobe did change. P.S. That fire dancer in the meme above is that insubordinate six-year-old who wore her mother’s flannel shirts. : )

Raising creative children is an adventure worth having.

Let other moms and dads know that kids who are not run of the mill grow into great adults.