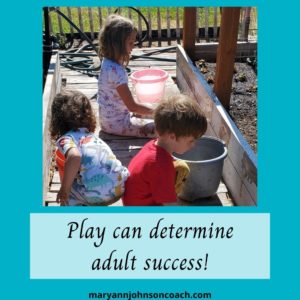 The POWER of Play

Parents and children’s brains don’t work the same. That statement won’t surprise any parent. Here is a story you will all relate to. Ted, aged two, hits Sally, age nine months. Sally begins to cry. You hear Sally and come running because lately, Ted has been hitting her more often. Hitting his sister is not ok, and you feel angry. You grab Ted by the shoulders, sit him in a chair, and for the 50th time yell at him that it’s not ok to hit his sister. Then, of course, Ted begins to cry.

In your mind, it’s evident that your grabbing and yelling are connected to Ted hitting his sister. You are wondering why Ted isn’t learning the lesson. You are angry and want this behavior to stop. That’s the message you intend to send. It might not be the best method, but it’s a reasonable message.

This is how Ted’s brain works, “Mommy’s angry, so she yells and hurts me.” Despite your well-intended message, the message Ted’s brain gets is that we yell and strike out when we’re angry. Unfortunately, there’s no connection between your yelling and the hitting of Sally, although, in your mind, it should be obvious.

My point with this example is not to discuss discipline issues but to show that children’s minds don’t process or see the same as our adult minds do. This is especially true in the arena of learning. Children and adult brains see or process learning differently. Children learn through play, which may look to adults like pointless, directionless, frivolous time-wasting.

Psychiatrist Stuart Brown, president of the National Institute for Play, created in 1996, said, “If you look at what produces learning and memory and well-being, play is as fundamental as any other aspect of life, including sleep and dreams.” NYT: Taking Play Seriously 2/17/08

“Parents bobble between a nostalgia-infused yearning for their children to play and fear that time spent playing is time lost to more practical pursuits. Alarming headlines about U.S. students falling behind other countries in science and math, combined with the ever-more-intense competition to get kids into college, make parents rush to sign up their children for piano lessons and test-prep courses instead of just leaving them to improvise on their own; playtime versus résumé building.” NYT: Taking Play Seriously 2/17/08

Decades of research have shown that play is crucial to physical, intellectual, and social-emotional development at all ages. This is especially true of the purest form of play: the unstructured, self-motivated, imaginative, independent kind, where children initiate their own games and even invent their own rules.

“Play is motivated by pleasure. It is instinctive and part of the maturational process. We cannot prevent children from self-initiated play; they will engage in it whenever they can. The problem is that we have curtailed the time and opportunities for such play.” David Elkind, Ph.D., The Power of Play: Learning That Comes Naturally.

“For most of human history, children played by roaming near or far in packs, large and small. Younger children were supervised by older children and engaged in freewheeling imaginative play. They were pirates and princesses, aristocrats, and heroes. But, while all that play might have looked a lot like time spent doing nothing much at all, it actually helped build a critical cognitive skill called executive function. Executive function has a number of elements, such as working memory and cognitive flexibility. But perhaps the most important is self-regulation— the ability for kids to control their emotions and behavior, resist impulses, and exert self-control and discipline. Executive function — and its self-regulation element — is important.

“Poor executive function is associated with high dropout rates, drug use, and crime. In fact, good executive function is a better predictor of success in school than a child’s IQ. Unfortunately, play has changed dramatically during the past half-century, and according to many psychological researchers, the play that kids engage in today does not help them build executive function skills. Kids spend more time in front of televisions and video games. When they aren’t in front of a screen, they often spend their time in leagues and lessons — activities parents invest in because they believe that they will help their children to excel and achieve. And while it’s true that leagues and lessons are helpful to children in many ways, (researcher Deborah Leong says), they have one unfortunate drawback…when kids are in leagues and lessons, they are usually being regulated by adults. That means they are not able to practice regulating themselves. As a result, (Leong says,) kids aren’t developing the self-regulation skills that they used to.” Creative Play Makes for Kids in Control by Alix Spiegel

I hope you begin to have a mental shift about what’s happening in your children’s brains as they engage in play. Rather than feeling desperate or discouraged about their play and seeming lack of interest in academics, walk with your children as their brains and learning naturally develop and mature. As you walk hand in hand together, prepare appropriately to open doors along the way and do the work necessary to effectively invite and inspire your children to walk through. And by the way, it’s fine if they don’t. The door isn’t closed forever.

One other thing. A BIG distraction to play is technology. I mentioned it briefly above, but I want to repeat it. Kids will stay on screens for hours if we let them. The older they get, the less we can manage their screen time. But your younger children will do better if you have screen-free times during each day.

Here are possibilities to consider:

This Friday there was no school. My grands were on their screens the minute they woke up. But as the morning wore on, a friend came over, and the screens were discarded for spray bottles and an ensuing water fight. There was a bunch of laughing, running, noise, and commotion. It was fantastic to hear.

If we manage screen time, even if our kids say they are bored, they will find a way to play if we don’t bail them out. Give them time and ignore the pleas of “I’m bored.”

A reminder of why we want our kids to play and the long term value of strong executive function:

These skills help children grow into adults who manage well in the world. So, let’s make sure there is time and opportunity for unregulated and imaginative play.

Let’s let other parents know about the POWER of play!