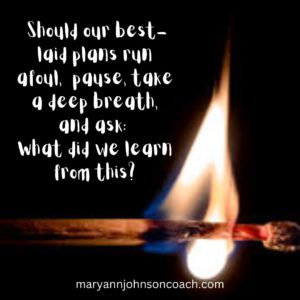 In September, I took a rest. I had traveled to Colorado in late August to help a daughter having surgery and was repeating that trip for the same reason early in September. I knew I was going to need a rest. The truth is I would like an even longer rest. You are moms so you know what I am talking about. LOL

However, consistency is a hallmark of my life. I have found that it is a principle of power. I also keep commitments to myself and others. I told you I would be back the first Sunday of October. : ) With that in mind, I am back.

Today I am sharing an article I read years ago, written by one of my favorite authors. It had a powerful lesson to teach – it is the parent or teacher’s job to establish an environment where children can learn and grow (even experiment) without fear of being in trouble.

I was not this kind of mom, and it took me decades to begin to scratch the surface of this lesson. I want you to receive the lesson, even though it is still a work in progress for me at seventy-two, although I have made long strides in the right direction. It will hearten you, challenge you, and, if internalized, help you be a more present parent. I hope you enjoy and learn as much from Kerry Patterson’s story as I did when I read it back in 2008.

“It Is Rocket Science” by Kerry Patterson

“When I woke up that bright and sunny morning, I never suspected that I’d burn down my bedroom. But some days just don’t go as planned.

It was a Sunday morning, and this meant that later that evening the entire Patterson clan would plop down in front of their fifteen-inch black-and-white DuMont TV and worship at the altar of the Ed Sullivan Theater. For those of us living at the far edge of the U.S.—and at the far corner of Puget Sound to boot—Ed Sullivan provided a lifeline to the bigger world of hip happenings and top-notch entertainment. Who knew what menagerie of singers, dancers, acrobats, and comedians Mr. Sullivan would bring us! Would it be Elvis or even the Beatles? Surely the ventriloquist Señor Wences or the puppet Topo Gigio would grace the stage. It was Sunday, it was sunny, and all was well.

And then came the bomb. Mom sat me down and explained that she and Dad would be attending a volunteer meeting that evening and that I’d have to chaperone in their stead. Chaperone? I was a fourteen-year-old kid. Whom was I supposed to chaperone?

It turns out that a friend’s daughter, who was attending the local college, wanted to buy her first life insurance policy, and Mom had volunteered our living room for the sales presentation. Unfortunately, since Mom and Dad would be gone, I’d have to hang around. Without my dampening presence, who knows what lecherous shenanigans the insurance agent might attempt? And, as if listening to an insurance salesman wasn’t going to be bad enough, the meeting was to take place during the sacred time slot of the Ed Sullivan show!

When the appointed hour finally rolled around, I squirmed impatiently while the insurance fellow yammered on about “contingencies” and “risk aversion” until I could take it no longer. With one swift move, I slipped unnoticed into my bedroom adjacent to the living room. This put me out of range of the insurance talk but left me with nothing to do. After carefully studying the skin on my elbow for a couple of minutes, it hit me. Under my desk was a large bowl of rocket fuel I had recently concocted and set aside. Now would be the perfect time to turn it from a dry powder into a solid mass by melting it down and then letting it solidify.

I had never performed this operation before, nor did I have the necessary equipment on hand, but I had heard that transforming the powdered fuel into a solid block gave it more stability. I quickly fashioned a Bunsen burner out of materials I found in the bathroom. A Vaseline lid, a wad of cotton, and a couple of jiggers of my dad’s aftershave lotion—and voila! I was ready to cook. Next, I poured a generous portion of the fuel into a Pioneer chemical container that consisted of a cardboard tube with a flat metal bottom and a pop-out metal top. The cardboard would provide me with a safe place to grip the container, while the metal bottom would take the flame and melt the fuel.

Within minutes, I gingerly held the jury-rigged beaker above the Aqua Velva flame and was merrily melting the powder. Sure, I’d be missing Ed Sullivan’s guest star, Richard Burton, as he performed a number from Camelot, but I was advancing science. What could be more important?

Then, with no warning whatsoever, the powder hit its ignition point and burst into a frightening torrent of smoke and flames, scorching the wallpaper above my desk and burning a hole in the ten-foot ceiling. I couldn’t drop the blazing tube, or it would have careened around the room and set the drapes and other flammables on fire.

So I gritted my teeth and held the flame-spitting cylinder firmly through its entire burn. For a full minute, the fiery tube charred the wall and ceiling while dropping blazing bits of debris on my arms and legs—burning holes in my shirt and pants and leaving behind pea-sized scars.

The rest is a blur. When it was finally safe to set the container down, I bolted from my bedroom and threw open the front door to vent the house. A fire truck loaded with highly animated firefighters rolled into our driveway and it wasn’t long until several of them were screaming at me for being so stupid as to—well, cook rocket fuel in my bedroom. Apparently, not being able to swing their axes or shoot a single drop of water into our home had really ticked them off. One angrily threw open the parlor windows when I asked him what I could do to get rid of the smoke. Another glumly stared at my bedroom and shook his head while muttering, “Boy, are you going to get it when your folks come home!”

And then my folks came home. As the fire crew backed out of our driveway and the insurance salesman and frightened college girl bolted from the scene, Mom and Dad slowly approached. Watching a fire crew pull away from your home is never a good sign when you’re the parent of a teenage boy; however, it did give my folks a hint as to what lay ahead. As the two walked stoically into my bedroom and surveyed the damage, Mom stated, “You realize, of course, that you’re going to have to set this right.” I did. I paid for the repairs out of my college savings.

And then, Mom said something that was so quintessential “Mom” that I’ve never forgotten it: “What did you learn from this adventure?” Most parents, when faced with the smoldering shell of a bedroom would have grounded their careless son through social security. Or maybe they would have hurled threats, pulled out their hair, or perhaps guilt-tripped their soon-to-be-jailed juvenile delinquent into years of therapy. But Mom simply wanted to know what I had learned from the incident. It wasn’t a trick on her part; it was how Mom treated debacles. For her, every calamity was a learning opportunity, every mishap a chance to glean one more morsel of truth from the infinitely instructive universe.

So, I talked to Mom and Dad about ignition points, research design, precautions, and adult supervision. I meant most of what I said. I even followed my own advice and avoided catching any more rooms on fire. In fact, save for one minor screw-up a few months later during a routine rocket test where I accidentally blew off my eyebrows (leading to an embarrassing few days where I was forced to darken my remaining forehead hairs with eyebrow pencil—not cool for a guy in high school), I averted further disasters of all types.

But what I didn’t avert was the bigger message. Mom wanted me and my brother to be full-time learners—ambulant scholars if you like. It was her central mission in life to turn us into responsible adults who learned at every turn. While the masses might bump into the world, take the occasional licking, and then endlessly complain, she wanted us to bounce back with the question: What does this teach us? While others carped about effects, she wanted us to find the causes. Our classroom was to extend beyond the halls of academia and down any path our journey took us—even into the occasional charred bedroom.

The implication of this message to parents and leaders alike is profound. It’s the adult’s or leader’s job to establish an environment where their charges can learn and grow (even experiment) without fear of being grounded through social security. This isn’t to suggest that either the home or the corporate learning environment should allow individuals to run about willy-nilly—heating up rocket fuel without a single thought as to what might go wrong. I had been irresponsible, and I was held accountable. But I had also been experimenting with rocket science, and Mom didn’t want to stifle this part of me. She wanted me to experiment, and this called for calculated risks. She saw it as her job to teach me how to make the calculations, not to set aside my test tubes and chemicals.

So, let’s take our lead from the ambulant scholar. Should our best-laid plans run afoul, may we have the wisdom to pause, take a deep breath, and ask: What did we learn from this?