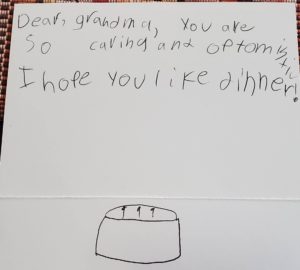 I come from an extended family of

I never knew that because how we were seemed ordinary to me. We weren’t mean to each other. We could be generous and kind, but there was a lot of complaining, and we were critical.

There isn’t enough sun today. The snow is too deep. The car is nice, but I wish it were red. These eggs are okay, but next time could you… Thanks for folding the laundry, but I would like… Hamburger keeps going up in price. I’m so glad you got a C in math, but I know you could do better if you worked harder.

You see what I mean. I mentioned this to a friend one day, and she said, “Well, that’s just normal.” It is normal, but it isn’t helpful if we want our lives to feel more joyful and successful.

I’ve seriously worked on the issue of watching my words and thoughts for close to two decades now. I have used many tools to move into the place where I manage my stories and responses better. I’m making progress.

Then last fall, I put a rubber band on my wrist

after reading a little book called A Complaint Free World by Will Bowen. The challenge was to go 21 days without being critical or complaining. Sigh. I have yet to hit day six. I have had many five-day streaks, but when you mess up, you start over. It has been almost six months. I would be discouraged, except I know that there is no timeline for change. It takes commitment and consistency for as long as it takes!

However, now and then, you get a perk that keeps you going. I got one on my birthday from Ben, who is almost nine. He said, “Dear Grandma, you are so caring and optimistic.” WHAT!!!!! Is that the coolest thing you have ever heard? NO ONE has ever called me optimistic.

This little compliment is going into my “I am enough bin” in my brain. From now on, I know that I am an optimistic person. I am so happy because I am making progress in a decade’s long pursuit.

This is the process of change and growth – line upon line and precept upon precept, here a little and there a little. We must be careful not to shut down and quit when a goal for growth takes more time and effort than we want it to take.

Parenting is a big job.

We don’t enter it with all the knowledge we need, and we bring baggage from our own growing up. As we parent, it will take years to get the experience we need and to jettison the baggage. Yes, our kids will suffer, but our children will be compensated as they observe our quest to be better, do better, and understand more. They will be blessed as they watch us remain consistent and immovable in our desire to grow and improve.

How do I know this? Well, I am 71. I carried a ton of baggage into my family, as did my husband. We were undoubtedly ignorant about how to do what we had taken on. Our seven kids occasionally suffered because we didn’t do things the best way. It was a long road with some significant bumps and a cliff or two.

But now our kids are adults; one turns fifty this year. And do you know what? I get cards, letters, texts, and videos telling me about this or that thing they observed me doing that has blessed their lives? WHAT? Yes, even when we are imperfect, if our goal is to learn, grow, and do better, it will bless our children when they are adults.

Next week I am going to share an absolutely exquisite gift from one of my children to their imperfect parent! You can, in time, be rewarded in the same way if you stay the course, do the best you can, keep learning and growing, and be an example of change.

Let someone else know that their efforts Will Be Enough! 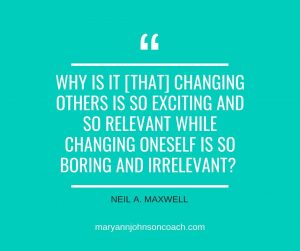 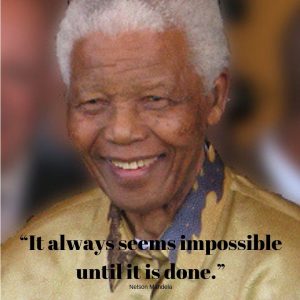