This month my grandson, Ben, turns 10. 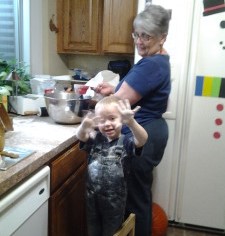 He is very excited about this birthday, which has gotten me thinking about our experiences together.

We had a fun day experimenting with baking when Ben was just two years old. I was baking gingerbread cookies. Baking over 2000 gingerbread men is a yearly tradition in December in our home. It is a BIG project! I was deep into the project when Ben came down the stairs into our part of our three-generation home. When he saw the flour, eggs, and partially made dough, he was desperate to help.

I am a very competent baker because I have been doing it for over fifty years. However, when you add a two-year-old to the mix, the whole thing changes.

Ben was interested in everything. He wanted to stir the dough. Ben tried rolling the dough, patting it, and cutting it out with the cookie cutter. He ate dough and dropped flour. He was having a GREAT time! I, on the other hand, felt a tad fussed. I hadn’t anticipated his ‘help.’ I just wanted to get the job done as quickly as possible because I had other pressing projects.

And there it is; adults are end product-driven while children are process-driven.

It would have been so easy to say, “Benny, grandma is busy. Run upstairs, and I’ll let you know when the cookies are baked. Then you can have one.” As a young mom, I had done that in the past, and I was sorely tempted.

Here is what I did instead.

I let him help and I watched him for a few minutes as I kneaded my ball of dough, and he kneaded his. I saw his sheer delight in doing something new. I observed as he “floured” the counter and the floor so his men wouldn’t stick. I listened to his laughter as he rearranged my utensil drawer. I watched him stack up the Christmas packages into a tower and then watched as they came tumbling down; our small tree was on the counter. And guess what, my heart softened. I loved watching him. It was fun, and he made the whole project even more worthwhile.

It did take longer, and my floor was a disaster. I had to eventually re-do the utensil drawer. The packages had flour on them, and the corners were a bit flattened. But Ben and I made a memory.

The best gift we can give to our children is to be Present with them and make them more important than the project. We and our time are the very best gifts.

Today when I showed Ben the photo of us baking together, he yelled out in an excited voice. “I remember that!” He was smiling from ear to ear. I also had a photo of him sleeping on my couch at the end of our project, and when he saw it, he said, “I even think I remember getting worn out!”

It doesn’t matter if Ben can really remember that experience or not; he was only two. What matters is that he remembers how he has felt around me, his grandma. He has felt seen and heard. No matter what we are doing with our kids or grands, it is all about relationships and making memories. Let’s make our kids more important than projects as often as possible. We can’t every time, but we can more often. The effort we make will improve our relationships

It isn’t always easy but it is simple.

Think about your child and

let the project be secondary.