I wrote this true short story many decades ago for my parents, for Christmas. I was working on letting them know how much I appreciated all they had given me despite the lacks in my family of origin. Isn’t that how it is in most families. Our parents can only bring to their parenting what they have and they add to their skills as they go. Being the first child, I experienced some of those lacks but as I grew, I also saw my parents grow. Anyway, I wanted them to know how grateful I was.

I posted it on my old website way back in 2011. I can’t believe that ten years have gone by! I wouldn’t have thought to repost it this year except for an unusual happening.  I was asked to submit a Christmas story for an anthology, which I did. I submitted this story.

I have to say that it doesn’t match most of the stories in  Tis the Season: A Christmas Survival Guide. The stories are not the magical kind we usually read about but are filled with tales of the chaos and sometimes hurt that accompanies the holiday for many. I don’t know why my story was chosen as it is peaceful and loving. It is also the final story in the book. I suppose it was becuase I ended it with ‘Merry Christmas.’ : )

At any rate, it caused me to think again about this family happening and my parents who were doing their very best for me and my siblings. I thought it might bring some treasured Christmas memories to your mind at this season of family and Christ. I hope you enjoy the read, the heart, and the generosity of both parent and child.

Christmas Past – A Gift of Charity

A true short story, written by Mary Ann Johnson years ago when her children were young, and she was remembering.

THE HEATER MADE a steady hum as it singed the small bits of pine I had placed on top. I’d never seen a heater like it until we moved into the new house. It was brown, shiny, and huge. It wasn’t as homey as Grandma’s Ben Franklin, but it was warm and didn’t create clinkers, for which I was grateful. The pine was Mother’s idea. She liked the smell the needles gave off as they slowly turned brown.

I was five years old, and Idaho Falls was cold and windy. Inside, it was warm and cozy. There were six of us, and the house was small. I saw it years later and small was a generous word for it. At the time, it seemed perfect.

Christmas was coming, and as always during that season, the sewing machine was humming away. Pieces of black velvet and red taffeta littered the floor. I noticed the buttons first, the most beautiful buttons in the world, shiny white with rhinestone centers. Those buttons were a treasure sewn on a cardboard square. I would have paid at least a quarter for them, a vast sum hidden away in my bank.

But the buttons weren’t for sale. They were going onto elegant dresses that my sisters and I watched take shape until I could hold back my curiosity no longer.

“Mom, are the dresses for us? Can we wear them?”

Who else would they be for?

With patience, mom explained that there was a family who needed help making Christmas special. We had so much, she said. She ticked our blessings off on her fingers. I remember the empty feeling in the pit of my stomach. I had never had a beautiful dress like that, never a dress with buttons that shone like stars.

As the days passed, the emptiness in my stomach was being filled, for as my mother sewed, she poured into me a feeling of gratitude for blessings received and a spirit of giving. She made me a co-conspirator. I cared for the baby, played quietly, and picked up those lovely scraps so she could continue to sew.

Soon the dresses were finished and gone. The gifts of love had been delivered. Then my mother began pouring charity into the empty place that the actual departure of the dresses left.

“Now girls, when we go to church, you’ll see those dresses on three other little girls. Don’t say a word. We want them to feel happy and proud. This is our special Christmas secret. Remember that it’s important for people to have dignity and be happy.”

We three, Cindy, Shirley, and I, turned our young faces to her and beamed. We trusted the words of our mother. We knew we could keep the secret. I had a feeling of joy in my stomach. Emptiness no longer lingered there.

It was still dark when we raced to Mom and Dad’s room. They arose slowly—too slowly! — finding slippers and waking the baby. Then there was the interminable wait as Dad lit the tree and turned up the heat. Finally, we were free to run pell-mell into an ecstasy that would last all day.

What? I stopped short. There they were among the gifts: those buttons attached to black velvet and red taffeta dresses. What a surprise and joy.

As I sailed into church later that day, I was wearing a prized gift, but the most precious Christmas gift I received that season was carried in my heart: gratitude for what I had, the love of sharing, and charity for others. This gift, given to me by my mother so many Christmases ago, has made all the difference in the quality of my life. Thanks, Mom!

Also, a thank you to my dad, who is now gone. He made wonderful toys with his own hands. We had them for many, many years, and they delighted all nine of us children. 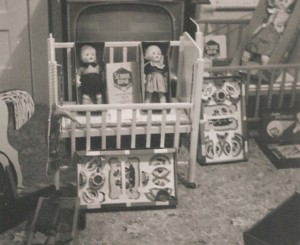 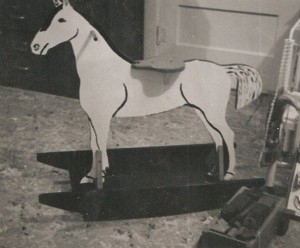